Crossfit: An Efficient Option to Get Fit

Anyone who knows me personally knows that I have participated in countless personal training sessions, group fitness classes, boot camps, spin classes, run half-marathons and have tried just about every other fitness regiment known to man. By far my favorite workout method, where I really feel I get the most “bang for my buck” and make the most of an hour is Crossfit. For nearly two years I have been member of a local Crossfit gym, first, Crossfit 480, and now, Crossfit Infinite Strength. I have gained muscle, felt stronger and healthier, and lost fat. I also have made some great networking connections through my morning Crossfit classmates, many of whom are working professionals like you and me. For a busy person who only has a limited time to dedicate to health, a Crossfit membership can provide a 1 hour, pre-programmed, group fitness class, in a more affordable option than personal training.

I know Crossfit can get a bad wrap out there, so I thought for those of you wondering I’d debunk and separate myth from reality.

When I first started lifting and started Crossfit, I remember telling people: “I just don’t want to get big” or “I don’t want to look like those girls at the Crossfit Games.” I’ve got news for you – I didn’t get “big” and I don’t look like the guys or girls at the Crossfit Games. Crossfit made me more toned and increased my muscle, but it looks good and fits my body. Plus, for each additional pound of muscle I gained, I now burn an additional 30 to 50 calories a day.

A big reason I don’t look like the people at the Crossfit Games (and neither do the guys or girls I workout with) is because we don’t take the same supplements or “enhancements” they do. We eat normally and train normally, generally once a day. The Crossfit Games athletes train more than once a day and are competing in Crossfit the competitive sport, not participating in Crossfit for health and wellness. If you think you will get “big” and “bulky,” it simply is not true. Here is a picture of my before Crossfit and two years later for you to see what exactly it did for me. 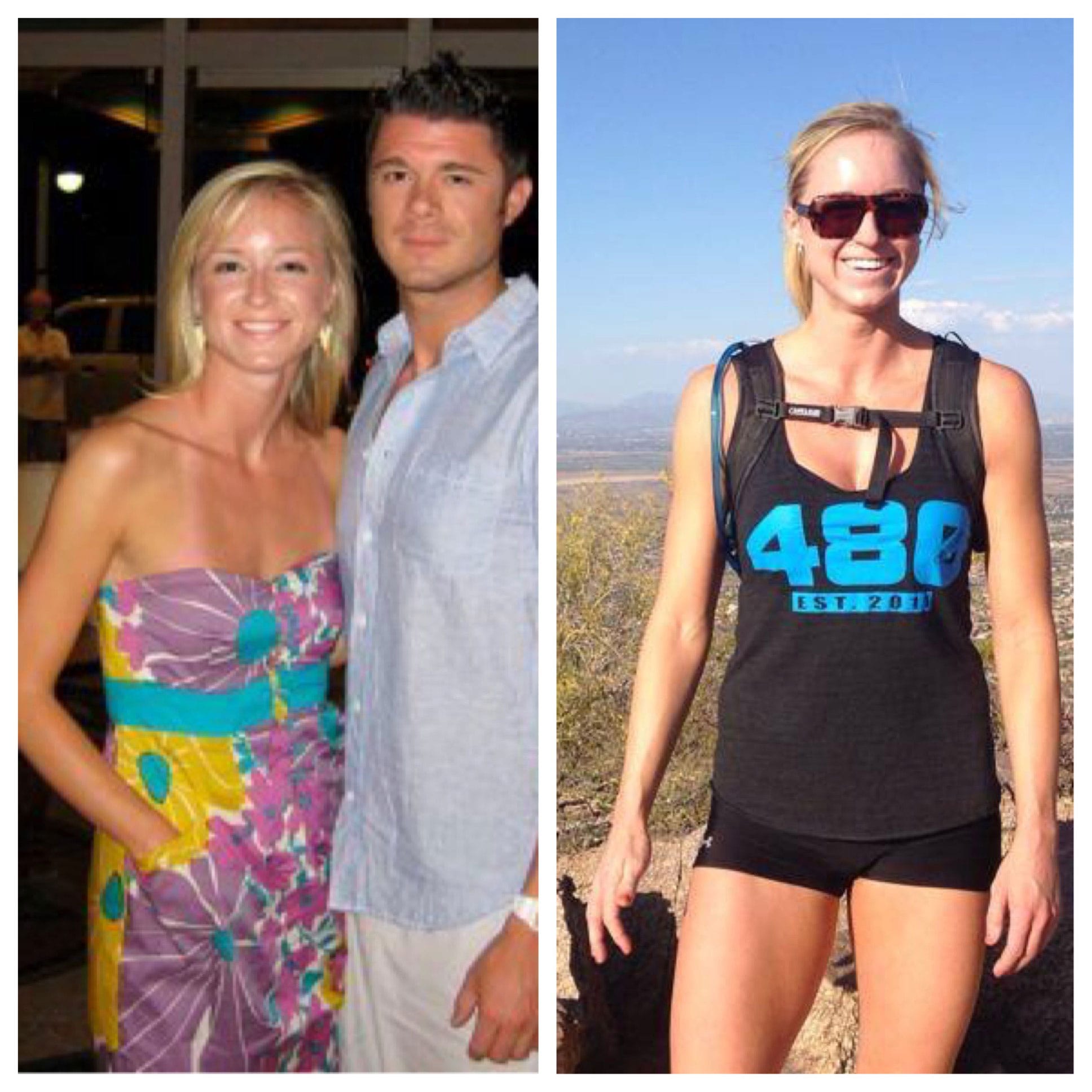 On the left is me before Crossfit, when I just ran and lifted. The right side is me now, 30 pounds of muscle later – healthier and happier.

Many people have heard about the infamous Rhabdo and stories of injuries in Crossfit. Like any fitness regiment, Crossfit can cause injury if not performed correctly and if there is not someone experienced creating the training programming for the Crossfit gym. Before joining Crossfit 480, I tried a number of other Crossfit gyms and other fitness routines that resulted in overtraining and risked injury. I have never been injured from Crossfit, but I did sustain stress fractures from just running earlier this year.

The key is to find a Crossfit gym that has someone with experience planning the programming and ensuring the programming is not entirely filled with “super intense” or “Hero WODs” on a daily basis. FYI, WOD is an abbreviation for “Workout of the Day,” a common Crossfit term. Hero WODs are some of the most strenuous workout experiences in Crossfit that have been conceived and are intended to be performed with intense effort, in honor of our fallen heroes, for example, Angie or Murph. When you visit a Crossfit gym and see a lot of repetitions at a high weight for multiple days or weeks in a row, that is usually a sign that it is not a great Crossfit gym with good programming. It is a process of trial and error, but eventually you’ll find a gym that has the right balance of intensity and lighter days for you.

Myth: Crossfit is a groupie, strange cult-ish, and rude fitness society.
Reality: Your Crossfit experience is based largely on the gym you select.

I’m going to be honest, the first Crossfit gym that I tried I hated. They put me on a rower and told me to try and beat a guy in a 1000 meter row. Then, throughout the workout, they were yelling at me to push harder and try to catch up to him. At the end of the workout, they shared their “analysis” and placed me into the beginners group because I was “too competitive.” I am a competitive person, don’t get me wrong, but nothing made me more frustrated than having someone push me along, telling me I was supposed to keep up with a male athlete who was 5 inches taller and had 40 pounds more muscle that me. After that experience, I vowed never to try Crossfit again.

A year later, I went to try another Crossfit gym, against my will. This gym was collaborative. The coach was cheering me on to finish and didn’t pin me against an unrealistic competitor. At the end, the coach told me there was only one class for everyone and everyone worked out together, regardless of skill or competitiveness. I fell in love immediately and joined – it was Crossfit 480. My point is, that like all gyms and fitness classes, there are good Crossfit gyms and bad ones. You just need to find the one that is right for you if you decide a 1 hour pre-planned workout is what you want. I love my gym and the people there. We don’t all eat a paleo diet, we do things other than just Crossfit, like hike, go wine tasting, do yoga, and more. And the best part? I have a built in accountability system with friends.